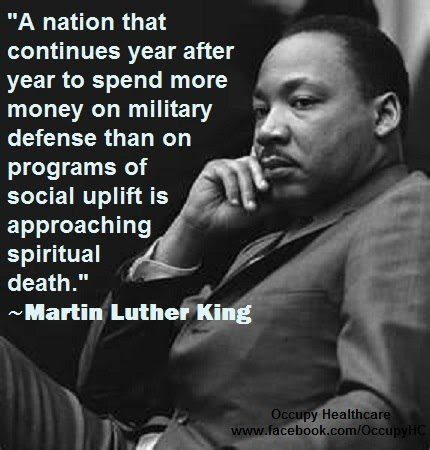 Posted by Dancewater at 9:55 PM No comments: 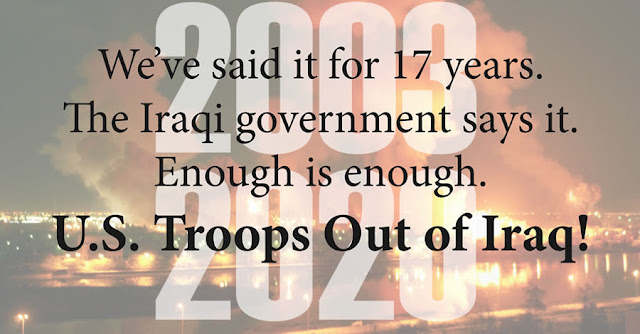 The massive evil of the war of aggression has gone on in Iraq for 17 years now. It is beyond disgusting. I wish all the war promotors and supporters would drop dead right now.

Posted by Dancewater at 4:17 PM No comments:

"If the button is pushed, there's no running away,
There'll be no one to save with the world in a grave" 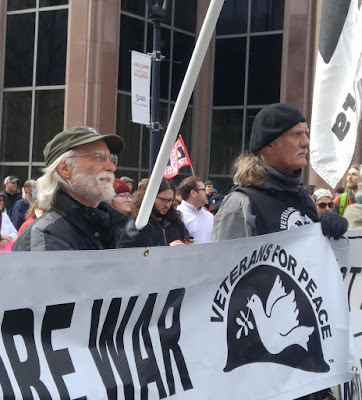 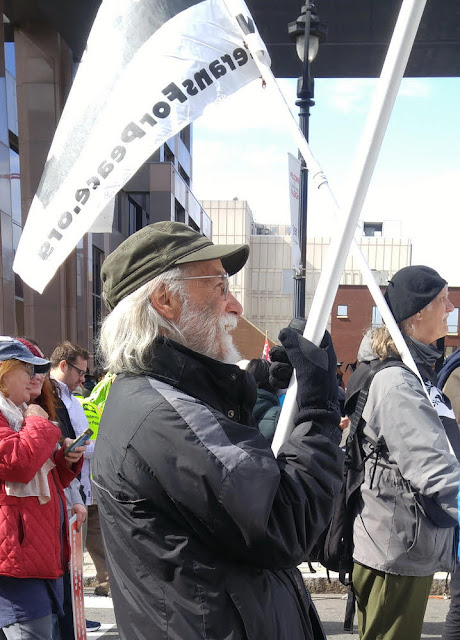 Photos of Ken Jones representing Veterans for Peace, Chapter 099. Photos taken by Vicki Ryder (of Raging Grannies) at the HKonJ rally in Raleigh on February 8, 2020.

Ken Jones also sang from the stage at this rally and here is the song he sang (will share you tube video if one turns up):

I grew up a good boy
and I followed the rules
I knew we were good guys
and the rest of ‘em fools
But when I got older
what truth did I find?
That I had been raised with
a militarized mind.

In schools and on TV
They taught us to hate -
that god loved us better,
that our country was great.

But when we got older
what truth did we find?
That we had been raised with
a militarized mind.

We’re told that we’re free
but look at our jails
the poor in our streets
the war that prevails
Now it’s time to wake up
leave the lies all behind,
and free ourselves up from
this militarized mind.
Posted by Dancewater at 1:30 AM No comments:

About a Sanders vs Trump election

America just can’t catch a break. After three long years of brutal oppression under Donald Trump’s Russia-backed Nazi Reich, it turns out the only Democratic candidate with a chance of unseating him in November and rescuing the world from the Putin-Nazis is a 78-year-old bloodthirsty Commie with a Khmer Rouge-like army of kill-crazy followers.

Yes, I’m afraid the rumors are true. Apparently, elements of Jeremy Corbyn’s recently-disbanded Nazi Death Cult have regrouped in the United States, formed an alliance with Bernie Sanders fanatics, and together this Mega-Commie Kill Swarm is roaming the Internet with complete impunity, sadistically mass-murdering Sanders critics and defenseless differently-abled persons with vulgar language and vicious poo-memes.

The corporate media are doing their best to alert Americans to the imminent threat. CNN broadcast a special report explaining how Sanders’ “army of supporters” are “bullying” and “frightening” his critics into silence. An “outspoken Elizabeth Warren supporter whose daughter with Downs syndrome is recovering from cancer” was verbally-abused to within an inch of her life. An “activist dying of ALS” was instructed to go “f___” himself. The Working Families Party was subjected to a series of inappropriate adjectives. The Party’s leader, an African American and a personal friend of Bernie Sanders, was taunted with a racist Tweet, which Sanders took to Twitter and condemned, but by that time it was much too late. His Commie Kill Swarm was beyond his control; they started tweeting memes comparing Elizabeth Warren to a snake and Pete Buttigieg to a rat, and otherwise terrorizing the American public.

Senior Investigative Correspondent Drew Griffin spoke to several other “victims” of Sanders’ Commie Kill Swarm’s tweets who are recovering from their Internet traumas in undisclosed secure locations and so insisted on remaining anonymous. According to Griffin, these emotionally-traumatized victims are so emotionally traumatized by what they experienced on the Internet that they wouldn’t even let him describe the traumatic “circumstances” surrounding their “attacks.”

But by far the most bombastic display of unbridled Sanders-Commie-Kill-Swarm-Panic was MSNBC’s Chris Matthews, who totally lost it after the last debate and started sputtering about “socialists” staging public mass-executions in Central Park. Matthews is apparently firmly convinced that Sanders, if he wins the election, plans to dress up like Fidel Castro, march Matthews and his cronies out onto the Great Lawn, and go full-bore Daenerys Targaryen on them.

(any candidates with dragons has got my vote!)

Thus the “Sanders Swarm” hysteria, and the Iowa caucuses “technical difficulties,” and whatever other propaganda and dirty tricks the Resistance has planned to prevent a Sanders nomination, so they can lose to Trump with a non-populist candidate and play “Resistance” for another four years.

So, unless you relish the thought of that, or the thought of watching a humiliated Bernie obsequiously shuffle around the country campaigning for Buttigieg, like he did for Clinton, please do what you can to get him nominated, so we can enjoy a Pol Pot vs. Hitler election.

The rest of the article is here.

The Afghanistan Papers and a Mother’s Question

The Washington Post recently released the Afghanistan Papers, which are internal government documents that exposed the lies told to the American people, documenting early on that the Afghanistan War was a debacle and could not be won. Yet, our government chose to continue that war now in its 19th year.

As the mother of an infantry officer who served in Zhari District, Kandahar Province, Afghanistan, at the height of President Obama’s surge, I have a question:  How do three Presidents and top military leaders responsible for the Afghanistan War, justify their actions to those mothers who lost a child for no good reason?

Our government, and those who enable endless war, have clearly shown us what they think of our military men and women, the ones they proclaim to honor and respect – that, in fact, their lives are disposable, and can be simply thrown away, sacrificed for lies, unwilling to admit the Afghanistan war could not be won, damn the consequences.

As the Afghanistan Papers clearly outline, lies were told to benefit ladder climbing officers, falsely documenting progress on their watch, when none was made. And lies were told by our government leaders, on both sides of the aisle, who knew, or should have known that the war was futile. And the arms makers made a killing off of killing, raking in billions of dollars, year after year. They were just fine with the concept of endless war and endless profits. All of this is despicable and disgraceful.   Those in power have deeply betrayed our military men and women.

These facts are just another way to continually torture families who lost a loved one, or whose family member returned home from war broken, physically and mentally.

And to add more insult to injury, Congress overwhelmingly approved, in the wake of these horrendous revelations, the ever-increasing Pentagon budget of $738 billion.

Also, the U.S. has dropped more bombs on Afghanistan in 2018 and 2019 than at any other time since the war began. In 2019 alone, the US dropped 7,423 separate munitions on Afghanistan targets representing a dramatic increase in bombings since President Barack Obama's "surge" in 2010, when 5,101 bombs were dropped.  These bombings have greatly increased civilian casualties. And to what end? Killing civilians is the most effective recruitment tool, creating more enemies determined to fight America.
So, for the record – we have documented proof that the U.S. government has gone to war for lies in Vietnam, Iraq and Afghanistan. And these lies have cost the lives of at least 66,000 U.S. troops and the lives of well over a million civilians.

Stop the Madness – No More War.


Military Families Speak Out, a UFPJ member group
Posted by Dancewater at 6:34 PM No comments:

What if we nuke a city?